A coalition of media outlets and press freedom organizations seeking unimpeded access to ongoing old growth logging protests at Fairy Creek, near Port Renfrew, BC, have won their court challenge opposing the RCMP’s use of media exclusion zones.

The British Columbia Superior Court decision grants the group’s application to modify an injunction order granted to logging company Teal Jones in April. The clause directs RCMP not to interfere with media access absent a bona fide operational reason for doing so.

In the decision, Justice Thompson agreed with the coalition’s stance that use of geographically extensive exclusion zones, and associated access checkpoints, haven’t been reasonably justified. 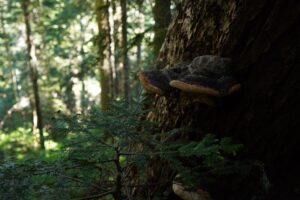 “I exercise my discretion to make the order sought by the media consortium, on the basis that in making operational decisions and exercising its discretion surrounding the removal and arrest of persons violating the order, the RCMP will be reminded by the presence of this additional language to keep in mind the media’s special role in a free and democratic society, and the necessity of avoiding undue and unnecessary interference with the journalistic function,” stated Thompson.

Brent Jolly, president of the Canadian Association of Journalists (CAJ) called the ruling a “watershed moment” in the history of Canadian press freedom advocacy.

“It’s been a day to remember. There aren’t many cases where you have a David and Goliath situation and David ultimately comes up on top. So, this is a monumental achievement for this group,” Jolly told reporters during a media availability.

Ethan Cox, Editor and Co-founder of Ricochet Media, said RCMP exclusion zones have been in use since at least 2013 during anti-fracking protests led by New Brunswick’s Elsipogtog First Nation and again in Newfoundland and Labrador during environmental protests at Muskrat Falls that resulted in the arrest of reporter Justin Brake.

“This has been one of the biggest thorns in the side of the press in Canada, in terms of press freedom concerns, and it has been dealt with by the courts before. In the Brake case, the judge was very clear that media are not considered to be in violation of an injunction when they’re following something newsworthy into an area that’s restricted,” explained Cox.

The tactic was also used by mounties at the Wet’suwet’en Coastal Gaslink protests last year, prompting the RCMP Civilian Review and Complaints Commission to write a public letter summarizing a prior report the RCMP had been sitting on that found broad exclusion zones were outside the force’s authority.

“So when we arrived at Fairy Creek, it was a very frustrating thing to see a replay of what was happening at Wet’suwet’en last year when we felt this issue had been dealt with,” said Cox, who noted the arrest of Canadian Press photojournalist Chris Young just hours earlier at a Toronto homeless encampment, where media have also been generally excluded from the area by police barricades.

“That’s very alarming because it demonstrates that these tactics that the RCMP are pioneering are spreading and police departments like Toronto Police are saying ‘hey look, the RCMP can get away with this, why don’t we do it too and put up barriers and keep media away from things we’d just rather not have them cover.'” 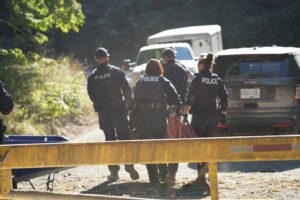 “The reason why this case is so important is seeing what was happening in Toronto…seeing what had happened in Ontario, there was a great deal of concern that if we didn’t nip this in the bud somehow, this was going to become the new normal. Police departments across the country were going to give themselves the power to exclude media from reporting on what was happening,” said Cox. “And that obviously is a huge threat to press freedom, a serious impediment to working journalists, but also a very serious affront to the public’s right to know.”

The coalition’s hope is that RCMP will sit down to talk about journalist access, an offer that’s been previously rebuffed. While Tuesday’s judgment doesn’t compel RCMP to take specific action, it does direct them to address the situation. Cox plans to send reporters back to the Fairy Creek site to test its limits.

In addition to the CAJ and Ricochet Media, the coalition leading the court challenge included Capital Daily in Victoria, The Narwhal, Canada’s National Observer, APTN News, The Discourse, Indiginews and Canadian Journalists for Free Expression (CJFE). The application was also supported by the Committee to Protect Journalists, the Society of Environmental Journalists and the Canadian Forum for Women in Journalism.