Chateau Laurier, the new low-budget Canadian web series from producer/director James Stewart, has made its debut with 300,000 views and 40,000 followers on Facebook in its first week. Featuring a Canadian cast including Fiona Reid (My Big Fat Greek Wedding), Kate Ross (Alias Grace), Luke Humphrey (Stratford’s Shakespeare in Love), and the late Bruce Gray (Traders) in his last role, the first season of the web series launched on Mar. 13 with three episodes of three minutes each. Set in turn-of-the-century Ottawa, the series was filmed in one day and produced with the assistance of BravoFACT. The producers are developing additional webisodes and plan to pitch the show as a primetime drama series.

Netflix and similar digital services will be required by the Province of Quebec to collect provincial sales tax as of 2019. Announced in Tuesday’s budget, both Canadian and foreign companies will be required to pay QST once they exceed the $30,000 a year revenue mark. 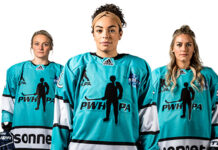