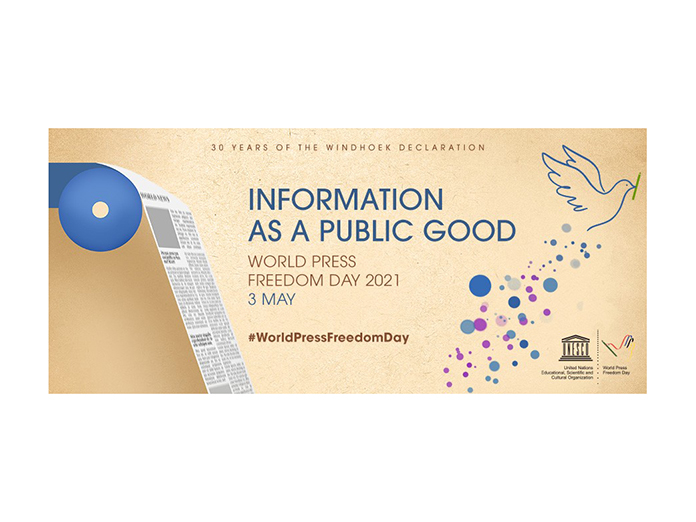 It’s World Press Freedom Day and while 2021 marks slight improvements in press freedom in North America, according to the latest World Press Freedom Index compiled by Reporters Without Borders (RSF), journalism is still completely or partially blocked in 73% of the 180 countries ranked by the organization.

Reporters Without Borders says obstacles to news coverage grew in many jurisdictions over the past year, fed in part by the pandemic, which has been used as an excuse to block journalists’ access to information or reporting in the field. Canada climbed two spots on this year’s index, from 16th place in 2020 to 14th this year, while the U.S. moved up one place on the list from 45th to 44th.

The organization says while Canada continues to demonstrate a strong commitment to international press freedom protections, including committing $1 million towards UNESCO’s Global Media Defence Fund, there is still progress to be made. In particular, it highlights the struggle of those attempting to cover issues around the rights of Indigenous peoples and land disputes, noting that despite a 2019 court ruling stipulating that special considerations be granted to journalists reporting on such conflicts, charges were laid against three members of the media in 2020, including American filmmaker Megan Cox, while filming the Wet’suwet’en First Nation land defenders’ gas pipeline resistance in northern B.C.

Among this year’s honourees are Nathan VanderKlippe, The Globe and Mail‘s China correspondent, and Sarah Cox, investigative reporter with The Narwhal, who are the co-winners of the 2021 Press Freedom Award.

Risking detention, deportation or imprisonment, VanderKlippe reported on forced labour camps where thousands of Uyghurs, the Muslim minority ethnic group, are being held. VanderKlippe evaded attempts to physically bar him from the area, and his photos and reporting helped document China’s controversial practices in Xinjiang.

From quarantine to being followed and physically restrained, @GlobeAndMail‘s @NVanderKlippe has gone through great lengths to tell the story of China’s Uyghur population to Canadians. On #WorldPressFreedomDay we recognize his effort as a co-winner of the 2021 Press Freedom Award. pic.twitter.com/acUYBowMWk

Cox is recognized for her continued coverage of the controversial Site C power dam on the Peace River in northeast B.C., exposing major, undisclosed problems with the project via access to information requests.

“When the public has access to this type of information in a timely fashion, it champions much better decision-making.” We’re so proud to announce @SarahCox_BC of @TheNarwhalCa as a co-winner of the 2021 Press Freedom Award. #WorldPressFreedomDay #cdnpoli #bcpoli pic.twitter.com/pBh3OPmQdG

Press freedom Citations of Merit have also been presented to the Toronto Star‘s Kevin Donovan, for his efforts to unseal court documents in high profile criminal and civil cases, and to the Calgary Herald’s Meghan Potkins and Madeline Smith who used the city’s freedom of information system to uncover financial abuses by a city councillor.

Congrats to @CalgaryHerald‘s @MPotkins and @MekSmith on receiving press freedom award citations of merit for their work uncovering financial abuses by a city counsellor. On #WorldPressFreedomDay we recognize the important link between strong journalism and a healthy democracy. pic.twitter.com/LHPIBAHR2s

“More and more these days, we as journalists need to be better at using the tools at our disposal but we also need to be bold and creative.” Congratulations to @TorontoStar‘s @_KevinDonovan for receiving the press freedom citation of merit. #WorldPressFreedomDay pic.twitter.com/chHpCoOnqU

The Vancouver Sun’s Kim Bolan is this year’s recipient of the Spencer Moore Award for Lifetime Achievement. Named for one of the organization’s founding directors, the award recognizes a journalist’s lengthy work in the pursuit of press freedom.

Known for her coverage of the 1985 Air India bombings, gangs, and organized crime, Bolan was the original recipient of the World Press Freedom award in 1999 and has faced continued threats over more than two decades, including learning she was the subject of a murder plot while covering a trial in 2017.

“Believing then as I do now that caving to threats would send the wrong message to those wanting to silence journalists in this country.” We’re proud to announce @VancouverSun‘s @KBolan as the winner of the 2021 Spencer Moore Award for Lifetime Achievement. #WorldPressFreedomDay pic.twitter.com/kc7Qav15et