I first met Sidey when I was hanging in Sydney in 2005 and he was one of my big influences in what I call content-related or creative radio imaging. He had that special something in his writing, his production, and as a person. Sidey, to me, is one of the best writers and creators in the business. His style is ultra creative, surprising, and really really funny. No doubt that made him the Iron Imager a few years ago and of course the undisputed record holder in APRA (Australasian Performing Rights Association) Awards and nominations for imaging and production. I am really looking forward to seeing you again soon mate! Enter Sidey!

AS: Give me your thoughts about creative radio, writing, production. Why is it important? What are the rules for being creative with imaging?

Sidey: Creativity in imaging is important to make your station stand out from others and give it its own personality. It could be cheeky, have attitude, or be credible and sell passion for music and shows. It just makes your job more fun if you add something extra.

There are no rules. That’s the fun part. Just experiment in the studio with ideas. A lot of stuff doesn’t work… Most of the time I’m just amusing myself and no one else gets it, but every now and then something awesome happens and you get an idea that everyone’s into. Sometimes even your PD or CD (whatever they’re calling themselves these days).

I think the trick with being creative is to just think upside down. Think of the opposite of what you’re trying to write. Try and relate two completely different ideas together…or just get a straight message and figure out a way to turn it on its head. There’s no one formula because every idea comes from a different place, but there probably are formulas. Just gotta find the one that works each time. 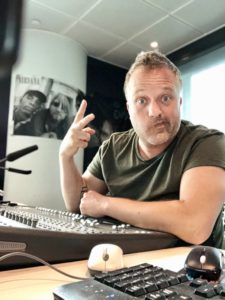 AS: How important is writing for rock / classic rock imaging?

S: Rock fans are the most passionate people on Earth. Writing is always important. You’ve got to convey an attitude and personality for the station. Sometimes you’re gonna want to sound cool, sometimes edgy, sometimes funny, or emotive…but you always need to be credible and know what you’re talking about. Rock imaging involves a lot of writing about the artists and their history. You’ve got to know the artists. Who are they? When and where are they from? Know the albums. It’s not just about the hits. Be familiar with their back catalogues. Getting info about artists wrong is the worst thing you can do.

Then, you’ve also gotta have a good memory or knowledge of the big hits too. Know where the great riffs are. Know which songs (or albums) have those killer drums, bass, vocal screams, cold vocal bits, etc. When you’re dealing with thousands of songs, instead of just the top 40 it helps to know where to start looking for sounds.

AS: What are three of your techniques for creative writing?

S: My first suggestion would be to remember funny stuff that happens in your day to day life. Like if I’m out with friends and someone says something, remember it. Then figure out a way to use that joke or comment in a script. Work around it.

Second, start off with something topical. What’s in the news? Use that as a base for something. Take two completely unrelated things and mash them together into one idea. They could have nothing to do with each-other, but think about what little things they have in common.

AS: How do you come up with ideas? Are there any tricks or brainstorming techniques?

S: One way I start writing is by making a list of words that relate to whatever I’m writing about. Sometimes in my head…sometimes I write them down. I find that if I keep writing down random words and thoughts, that eventually an idea pops into my head. Then I elaborate on it until it works or doesn’t work. In which case I go back to the list again. 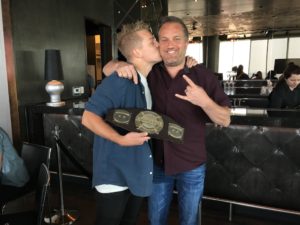 AS: What is your favorite place to find inspiration for creativity?

S: I watch a lot of TV, listen to a lot of music, and see lots of movies. They’re all great for inspiration and ideas. A great idea could start with a funny moment on TV, I might hear a great riff in a song, or a movie could spark something. I also listen to whatever podcasts I can find about radio imaging and sound design (can you suggest any more?). Just hearing how other people approach their work inspires creativity for me. Could be a plug in, could be something about workflow.
The great thing about being a dad (I have three kids) is that they are constantly doing funny and awesome stuff. They are hilarious, while at the same time the most amazing little people you’ll ever meet. Basically, just an endless source of funny stories and creative inspiration! 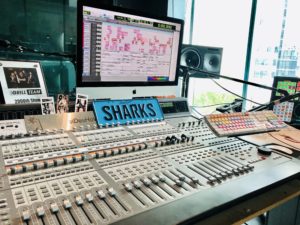 AS: How do you schedule your work and other priorities?

S: I work in short blocks of time wherever possible. I work on one project for a bit and then switch and move on to something else. My theory is that I get a bit of variety and don’t get bored and I also chip away at multiple jobs, so everything is in progress. The next day I revisit stuff with fresh ears, fresh ideas. Maybe complete a job, maybe move on again. Unless there’s a tight deadline. Then I just work crazy bananas fast. The more I can write and manage projects myself also helps me manage my time, as I am not relying on info or direction from other people.

AS: What is the best Pro Tools or production trick anybody should know?

S: Just learning what all the plugins actually do is the key. Understanding what you are doing by turning something on, or putting up a fader etc. helps you with the mix and overall sound. Another thing I’ve learned with Pro Tools is sometimes less is more.
I like to work with the least amount of plugins possible. This usually makes the session simpler to work in and understand and helps me work quicker. But the opposite would most probably work for someone else. No rules here. 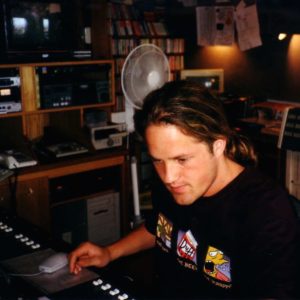 AS: Who were your radio production idols, who influenced your work as a producer?

S: I’ve been inspired by pretty much every image producer I’ve ever known. Starting with Simon Hicks (Slash) back at Triple M when I started out in 1995. He was the guy that took a chance on me and hired me. Wayne Fox was also at Triple M back in the early days and he taught me a lot about frequencies and the theory of production.

Rusty Graham was Triple M’s head writer back then and that guy was a huge influence on me. I learned a lot about writing and also working with and directing talent. He was also good for some really clear career advice and is pretty much the guy that originally made me commit to working in production over my original goal of being a writer.

Then other guys that have influenced me were people like Ben Ryan, Dave Konsky, Matt Nikolic, Brendan Tacey, Jake Kaplan, Trevor Shand and of course – John Frost.

My favorite newbie producers that I love checking in on and stealing ideas and techniques from are Dan Hunt, Darcy Milne, Chris Kubacki, Brad Leask and Sebastian Bustamante.

AS: What would be your key pieces of advice for someone wanting to get into imaging? 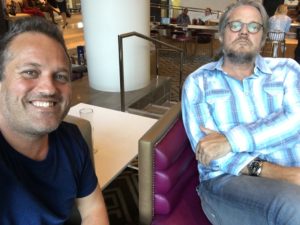 S: Get Pro Tools and practice at home (a home studio is a must these days). Always monitor your local or favorite radio stations. Work on ideas and send them to places as demos. Keep hounding people. Bombard everyone with your best ideas, listen to feedback, and make changes. Constantly evolve and keep sending your improved work in – eventually you will get a job. Send Brendan Tacey an email every day for a year!