“Everything I ever knew about David begins and ends with a man who loved radio,” said Larsen’s former longtime co-host, Tony Peyton. “When he was 19, he worked three different stations in Squamish: his daytime gig was as ‘Shotgun McLoud’ on the country station, drive he was ‘Danny Magic’ on the pop station, nights he DJ’d as ‘Jack Blaze’ on the rock station.”

Peyton first met Larsen at SILK FM (CILK-FM) Kelowna where they would go on to an eight-year run co-hosting mornings with Kelly Abbott Church.

“Within a few weeks of his arrival he had transformed the station, putting together an award winning morning show and transforming Kelowna radio. It is safe to say that David elevated radio in the Kelowna market and it has never looked back,” Peyton told Broadcast Dialogue. “He was a great broadcaster in his own right but he never needed the praise to come his way, instead he let the ‘sun’ shine on the talent he was developing on his morning shows. He was a rare find in a business that is often jagged and abrupt with people. He was kind and empathetic and carried himself with grace.”

Larsen eventually left to join Rogers Radio in Vancouver and Chilliwack, before he and Peyton reunited in 2009, reigniting their morning show on K96.3 for a decade, up until Peyton’s retirement in 2019. Larsen subsequently joined JACK 103.1 (CHTT-FM) Victoria as PD for the brand re-launch in the market and morning show co-host. 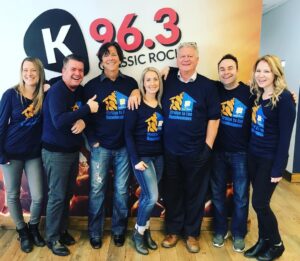 Peyton will be one of the guests featured on the K96.3 morning show Monday where General Manager Peter Angle says Larsen’s contribution to Kelowna radio and the community will be celebrated, alongside listener memories.

“It’s pretty hard not to acknowledge the contribution David has made to the community of Kelowna over the years and The David and Tony Show,” said Angle. “For those that got to hear him every day, radio has that personal one-on-one connection and even today, we’re getting emails from people, messages on our socials…so we’re going to celebrate David, we’re going to share stories. He was an entertainer. I always thought that David saved his best enthusiasm and passion for his family, his friends and his listeners. You could certainly see that in the show that he built and the audience that he built, and the relationships that he built.”

Angle said Larsen’s initial cancer diagnosis came while he was still co-hosting on K96.3, but the veteran host was determined to carry on.

“He made it quite clear when he was going through his battle that he wanted life to be normal. You could see it in his on-air performance and the way he handled himself. We knew he was going through the first stages of that in Kelowna when he was with us,” relayed Angle. “You would never know. He kept his stuff very private, but I recognized coming into work every day was part of his treatment for himself…he just enjoyed being in the building and part of that show.”

Larsen is survived by his wife Patti and their two adult children.