Veteran talk show host and journalist Andrew Krystal passed away Sunday in Toronto. He was 63.

Krystal had most recently been hosting Krystal Nation on SiriusXM Canadian current affairs channel, Canada Talks, and running his own digital content and communications firm, working with clients like Tourism Ontario. 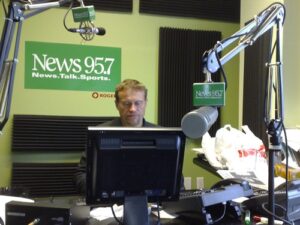 After graduating with an English degree from the University of Toronto, Krystal started in broadcasting creating syndicated entertainment content for Sonic Workshop, and contributed travel content to programs like CNN’s Travel Guide.

He went on to host various talk radio timeslots on AM 640 (CFIQ-AM) and Newstalk 1010 (CFRB-AM) Toronto. Known for his volatility at times, he gained a reputation as a “radio bad boy.”

Krystal was part of the launch team for Rogers’ Halifax all-news station, News 95.7 (CJNI-FM) (now CityNews Halifax), where he hosted Maritime Morning for the station’s first five years bringing the show to #2 in the market. He returned to Toronto in 2010 where he went on to work with Sportsnet 590 The Fan (CJCL-AM) and CityNews, where he served as the Toronto City Hall reporter during Mayor Rob Ford’s first few years in office.

Krystal won an RTNDA award in 2010 for his editorial on the death of Michael Jackson.