Get out the popcorn and settle in for the season finale of The Mayor of Kingstown starring Jeremy Renner this Sunday, January 9th, streaming on Paramount Plus. While you’re watching, look closely for Toronto actor Chase Lawless featured in the role of Sniper. 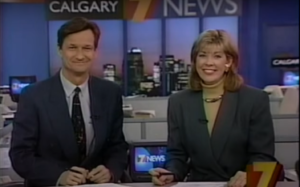 My eyes will be glued to the tube, not just as a fan of the show, but as a bigger fan of my son, Chase! My boy comes from good media stock – his parents have a combined career of more than 70 years in Canadian radio and TV. I, Shelley Swirski, started my on-air career when I was 17 at CKY-TV Winnipeg in the 1970s. I was filling in as “weather girl” – yup, that’s what they called me! Remember this was at the same time that Barbara Walters was signing a million-dollar contract to become the first woman to present the evening news on a major network on a regular basis, much to the displeasure of co-host Harry Reasoner.

Back then, I shared the newsroom with another fresh-faced teenager, sportscaster Rod Black, who would go on to an illustrious career as one of Canada’s best-known sportscasters. I’m not sure Rod even had his drivers license yet. A fast learner, at 20, I was promoted to co-anchor the CKY-TV 6 p.m. news. I was sitting next to my own “Harry Reasoner” who thankfully left within the year. Our broadcast went on to be number one in the market for the next five years unseating CBC-TV’s 24-Hours with its venerable host, Garth Dawley.

CKY Radio was also embarking on a meteoric rise under the reins of Program Director Vince Cownden, a newcomer from CKDA Victoria. Vince and I were rising stars in Winnipeg who decided to “link our stars.” We moved to Calgary in the mid-1980s where Vince joined Rawlco Communications and built 66CFR Radio literally from the ground up, followed by the launch of KISS FM.

Most proud was Vince’s dad, Walter Cownden, whom after serving in the Canadian Navy in WWII, studied broadcasting at the Lorne Greene School of Broadcasting in Toronto under Greene himself. He returned home to Victoria and had a life long radio career, starting with CJVI in the golden days of radio when he would read the weekend funny papers LIVE with Vince sitting on his knee. CFAX and CKDA followed before retirement in the 1960s. His wife, Mavis (Lawless) Cownden, as a 1950s homemaker, was also on radio with features on different recipes and shops around town, a favourite being the English Sweet Shop. 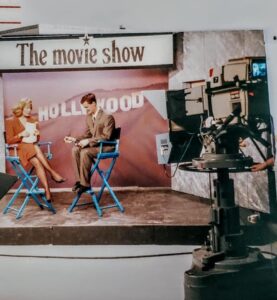 I, meanwhile, entered the Calgary scene as a sportscaster for CBC-TV and was one of only two on air women during CBC’s 1988 Calgary Olympics coverage. The other was Sue Prestedge. Times were changing, but slowly, further evidenced when I was physically thrown out of the locker room by NHL enforcer, Tiger Williams, who didn’t think female reporters should be allowed in for post-game interviews. I crossed over to Calgary 2 & 7 (later Global TV) and had a ton of fun co-anchoring the 6 p.m. news alongside sports legend Ed Whalen and “weather guy” Jimmy Hughes. They still weren’t sure what to call those weather “people.” Co-hosting the internationally syndicated, The Movie Show, with the late Larry Day was a blast, being treated like royalty on the Hollywood junkets. But that is a thing of the past too as studios cut costs and now host many junkets online.

Vince went on to finish his 45-year radio career with Rogers Communications at Lite 96 in Calgary. He is back on Vancouver Island still loving his music and doing jam sessions with his rock band from the 1960s in his home recording studio. I finished my broadcast career as Senior Producer for CBC-TV News Calgary and in semi-retirement have visited 25 countries around the world while looking for the next opportunity.

As parents, Vince and I certainly didn’t give Chase any acting chops but always encouraged him to follow his dreams: the bigger, the better. If anything, the acting DNA came from my sister, Sherisse Laurence, an actor and singer who, with Cal Dodd, hosted the variety show Circus for five years on the CTV network in the 1980s. She still does some local theatre in Muskoka.

Chase knew being in front of an audience was where he belonged during a high school staging of Treasure Island. Many plays followed, as did a degree from Red Deer College in Film and Television, a talent for stage and screen combat, and a passion for sword fighting.

Currently living in Toronto, Chase will be featured in two feature films this year – playing the lead in the caper film The Apprentice, and a strong supporting role in the western Bordello – both produced by Leader Media Productions of Toronto. On January 9th, look for Chase the season finale of The Mayor of Kingstown. On-set in Kingston, Ontario, Chase was pinching himself as he spoke with co-star Aidan Gillen, famous as Littlefinger in Game of Thrones, one of Chase’s favourite shows. While a surreal encounter, Gillen’s encouragement reinforced to him that he is on the right path.

Chase is heading to Los Angeles in early 2022 to continue following his dream. Since starting his career as a high school student in Cochrane, Alberta, he has promised to walk the red carpet at the Oscars with his mom. I can hardly wait to start shopping for a dress.

A lot of things have changed during our years in the “business”. No more smoke-filled basement newsrooms with film can “ashtrays” overflowing with butts; no more contact staccato of the Telex machines dinging an alarm with big news like when Elvis died; paper jams in the studio teleprompters – that was always fun; and hoping the smelly “soup” didn’t turn the film green!

Some wonderful memories, but now time to settle back on January 9th and watch The Mayor of Kingstown and the next generation. Go Chase Go!