Slawko Klymkiw, CEO of the Canadian Film Centre (CFC), will retire in spring 2021 after 15 years at the organization’s helm. Klymkiw, who was formerly the Executive Director of Network Programming at CBC, is credited with helping bolster the CFC’s national and international profile during his tenure. CFC’s Board of Directors says it will begin the process of identifying and selecting a new CEO with more information about the succession process to be shared in early 2021.

Vista Radio has made some leadership changes. Scott Armstrong will be serving in the newly-created role of Direction of Operations for Alberta/NWT. With the retirement of Peter Deys, General Manager, CJOC/2DayFM Lethbridge, he’ll also take on those duties. Peter Hobbs, Regional Manager Ontario Mid-North, adds the Ontario North group to his portfolio.

Shushma Datt, the CEO of I.T. Productions and a trailblazer for Indo-Canadian women in broadcasting, is entering semi-retirement and stepping away from some of her duties after a four-decade career. Datt worked at The Times of India and the BBC before moving to Canada in 1972. Facing significant racism from mainstream outlets, by 1984 she had started her own radio station, Radio Rim Jhim. The first Indo-Canadian woman to be granted a CRTC licence, in 2005 she launched Sp!ce Radio (CJRJ-AM) Burnaby. Over the years, Datt has also produced and hosted television shows for Shaw and OMNI, including “Women In Focus.”

Renowned radio personality Shushma Datt — known simply as Shushma to her fans — is credited with being the first Canadian of South Asian descent in Canada’s broadcast industry. https://t.co/U8cqW8RmQj

Mitchell Torres is joining Torres Media as its new Manager of Business Development. Torres, who holds a Masters of Science degree in Marketing and Consumer Behaviour from the University of Guelph, joins the family business he grew up in as a former promotions coordinator for Rebel 101.7 (CIDG-FM). Torres previously worked as the Marketing and Events Coordinator at Athletics Canada and was Executive Director of BeyondUs Sport and Development. He’ll report to Executive Vice President Tim Wieczorek. 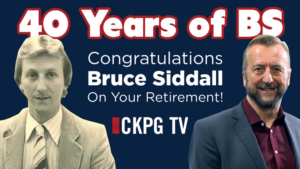 Bruce Siddall has retired from the Jim Pattison Broadcast Group in Prince George after 40 years. Siddall had been in sales and marketing with the company since Oct. 1980 when he left Ontario following his graduation from the Radio and Television Arts program at Niagara College. Watch CKPG-TV’s tribute to Siddall, here.

Brian Hamilton, General Sales Manager for KX94.7 (CHKX-FM) and 92.9 The Grand (CHTG-FM) in Hamilton/Burlington, has left Durham Radio. Hamilton had been in the GSM position for the last year, but with the company since 2011 as an account executive and retail sales manager.

Jesse Johnston, CBC Vancouver’s ‘South of the Fraser’ reporter, is moving on to a communications role. Johnston had been with CBC for almost seven years, joining the public broadcaster in 2014 from News 1130 (CKWX-AM). He’s also worked with Jim Pattison Broadcast Group’s stations in Red Deer and as a producer with CKNW Vancouver.

Lindsay Peters has been named as the new WIFT-V (Women in Film and Television Vancouver) Program Director for the From Our Dark Side program. Peters will help transition the program to an Advanced Development model, which is now seeking completed feature length screenplays with a creative team in place and will assist teams in connecting with potential financing partners and markets. Lindsay was previously the Executive Director of Canadian genre industry hub Frontières. 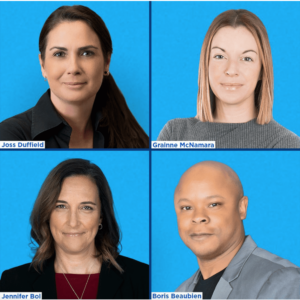 9 Story Media Group has announced four new additions to its global executive team. Joss Duffield joins the Distribution team as VP, Distribution Europe, based in London. Duffield will be responsible for 9 Story Distribution International’s business across Western Europe. She was formerly Head of International Sales at eOne and most recently Director of Content – Northern Europe at Turner. Gráinne McNamara steps into the new role of VP Live Action, Development & Production, leading the company’s development efforts for original TV series in live action kids and family. McNamara joins from King Bert Productions where she produced Malory Towers for CBBC and Family Channel Canada. Jennifer Bol will head the global 9 Story legal team as SVP, Legal & Business Affairs. Bol was most recently with Blue Ant Media where she served as Senior Legal Counsel and previously worked at 9 Story as Director of Legal & Business Affairs. Boris Beaubien has signed on to 9 Story’s Toronto team as VP, Technology. He was most recently with Sesame Workshop helping refresh Sesame Street’s 50th season and developing tech for their slate of series for AppleTV.

Vanessa Craft, Elle Canada’s former editor-in-chief, has been hired as TikTok Canada’s Director of Content Partnerships. Craft said in a Twitter post that she’ll be guiding creatives “to tell the stories that matter and help shine a light on Canadian talent on the huge platform that is #TikTok.” The video sharing platform has also launched its first Canadian ad campaign as its future in the U.S. remains unclear. 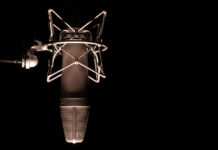 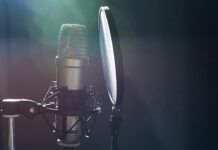 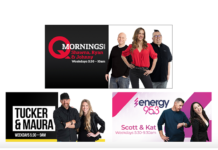