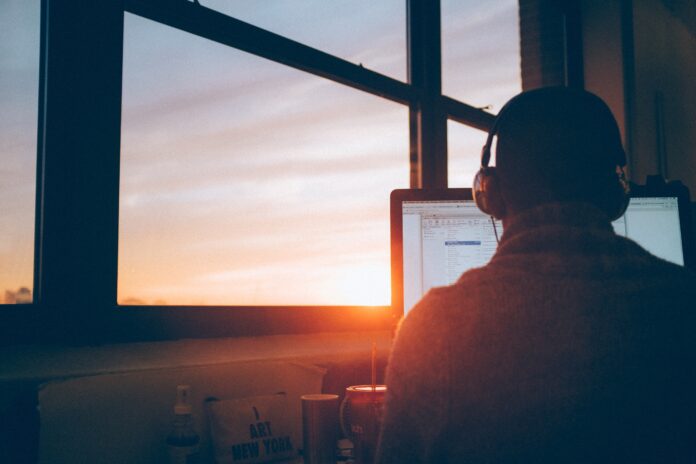 Edison Research and NPR have released their second annual Spoken Word Audio Report looking at the spoken word audio listening habits of Americans. It shows that the ability to multitask while listening, a desire for personal growth, and the pandemic, among other motivators, have boosted spoken word audio consumption by eight per cent over the last year.

The study is a comprehensive look at news, talk and sports radio, podcasts, on demand audio and audiobooks, drawing from Edison’s quarterly Share of Ear study, 1,000 indepth interviews with Americans, 18+, and a national survey. NPR supported the findings by sharing its own listener insights, including that it’s experienced 32% growth in its listening streams (33% on smart speakers) over the last year, and that its podcast audiences are up by 20%, and podcast downloads by 46%.

The study found that spoken word audio’s growth (30% over the last six years) is being driven by women, younger listeners, African-Americans, and Latinos, with three quarters of all Americans now listening to spoke word audio each month (43% daily).

Among the study’s insights are a glimpse into listeners’ perception of spoken word audio, with 65% agreeing it’s a productive use of time, while 62% believe it engages the mind in a more positive way than other media like music or TV/streaming. 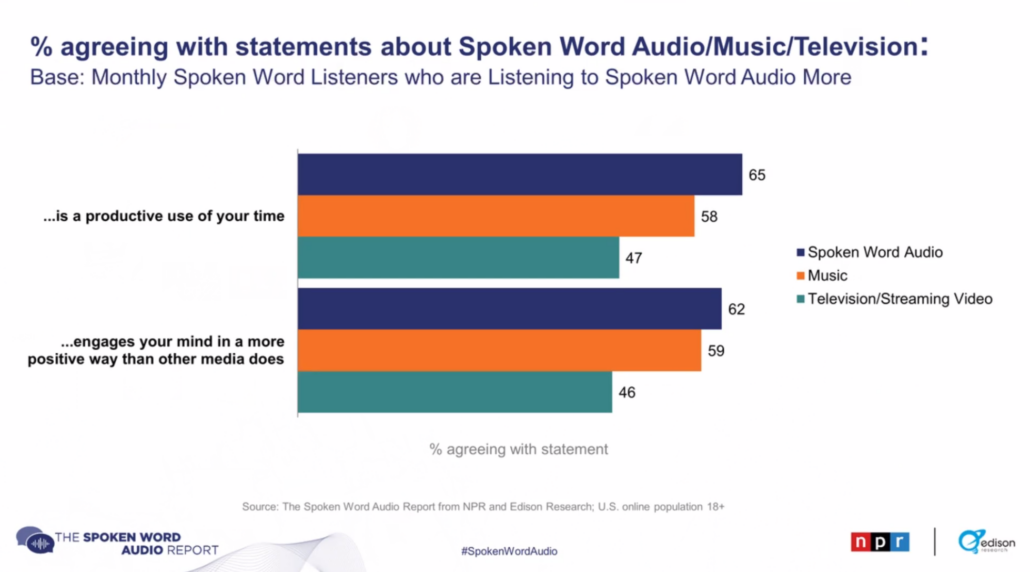 The study also explores reasons behind the decline in music’s share of audio listening which has dropped eight per cent since 2014 when music accounted for 80% of all time spent with audio. Spoken word has been chipping away at that lead and now accounts for 26% of all audio listening, versus 76% spent with music.

“This direction of change toward spoken word audio and away from music is actually consistent across every demographic,” said Megan Lazovick, VP, Edison Research, noting that the youngest listeners are the ones that have gained the most share since 2014, when spoken word only accounted for 12% of listening for those aged 13-34, growing to 22% today (83% growth among young consumers).

Spoken word audiences are also getting more diverse with a 125% increase in share for African-American listeners over the last six years and a 47% increase for Hispanic and Latino listeners. 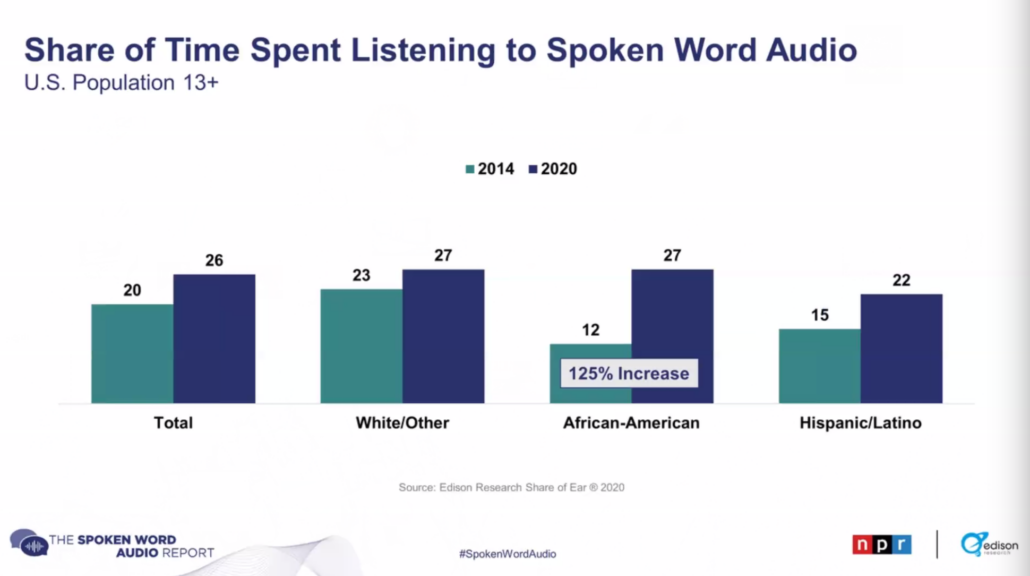 In particular, AM/FM Radio (talk, news, sportstalk, play-by-play) has fallen from 79% of all spoken word listening in 2014 to 55% in 2020 (including both over-the-air and streams). Podcasts have grown to 19% of that listening, up from eight per cent in 2014, while listening on platforms like SiriusXM or other streaming services has grown from 13 to 26%. 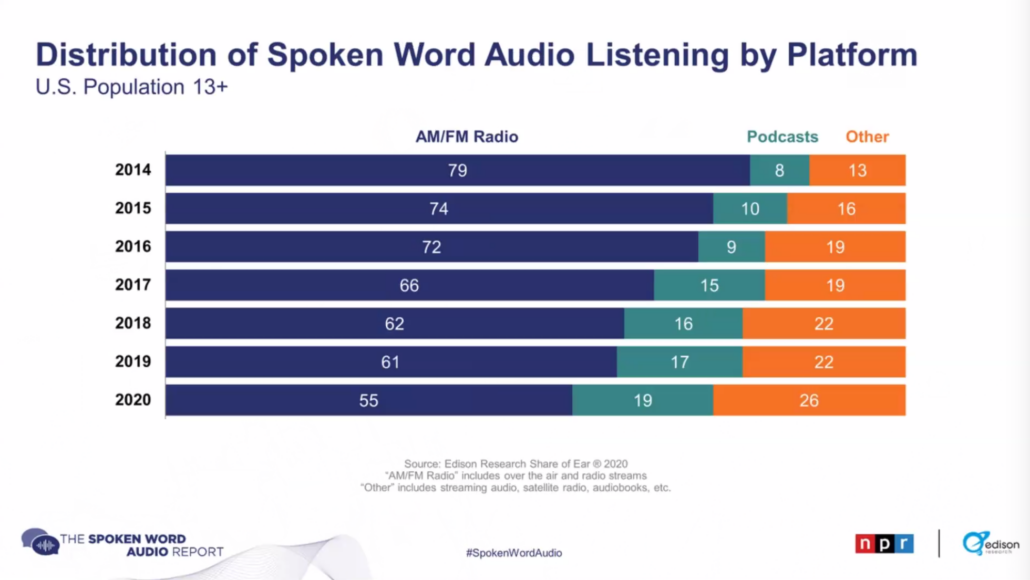 “We see radio listening losing some time to its digital competitors, however it is still by far the platform with the most time spent listening to spoken word audio,” said Lazovick.

With the use of digital platforms on the rise across all age categories, there is also a corresponding shift in what devices are being used to listen to audio. For the first time during quarantine, AM/FM receivers dipped below the 50% threshold in usage (47% of spoken word audio listening), with 31% of its share now going to mobile devices (up from 22% in 2019). The study says the proliferation of podcast apps and Spotify’s foray into podcasting have contributed to that growth with 30% of all daily smartphone audio listening spoken word. Four per cent of spoken word audio is consumed via smart speakers. 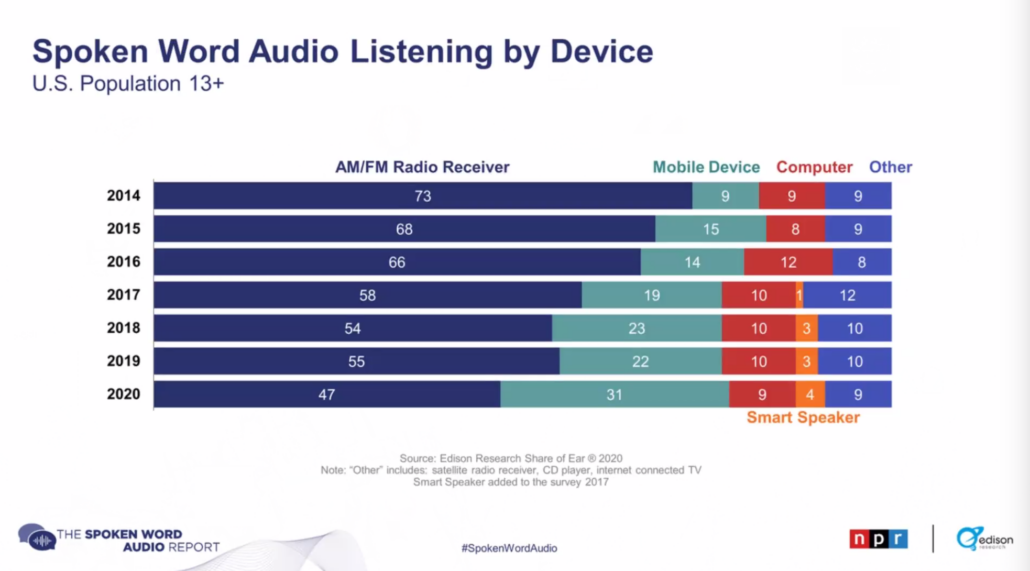 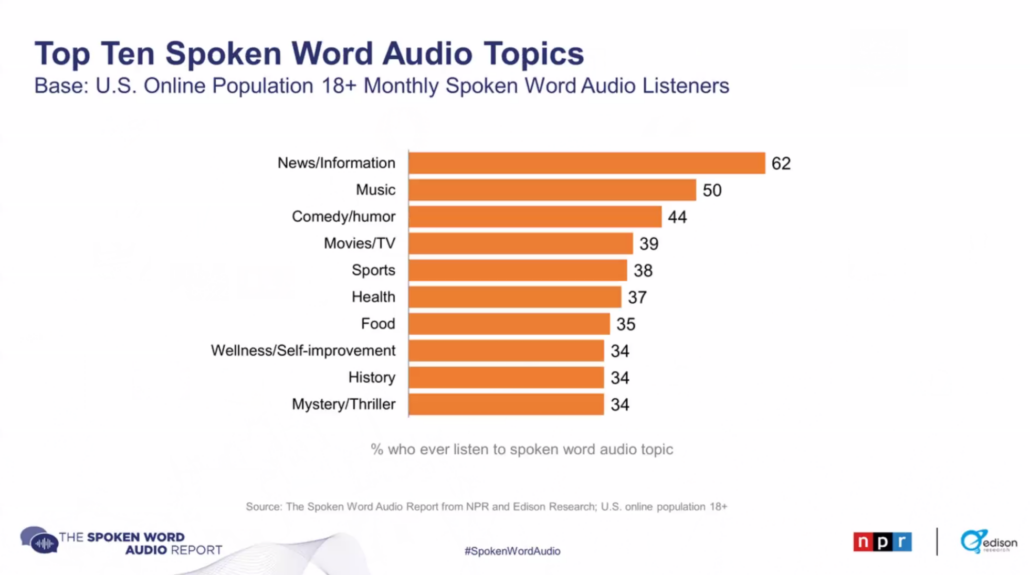 Ability to multitask (79%) while listening and being able to listen whenever you want (77%) were listed as the top motivators behind the growth of spoken word audio. Women and those 55+ indexed higher in this category.

“We compiled a list of 25 reasons…including being more aware of content, wanting perspectives you don’t hear or see in other media, feeling a responsibility to stay informed due to current events and wanting to improve yourself,” said Lazovick. 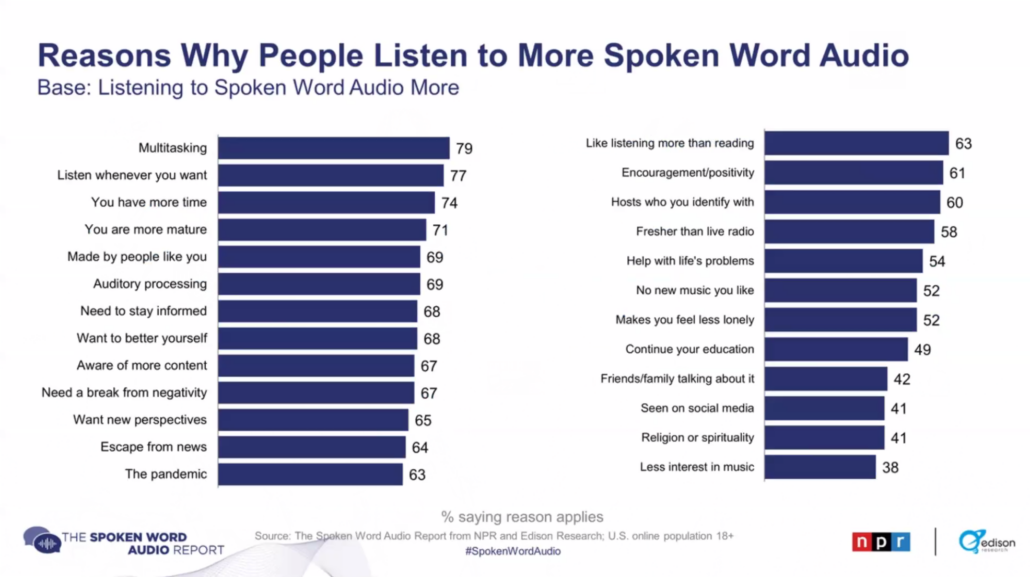 Edison says the desire for personal growth was a distinct theme. 71% agreed that as they get older and more mature, they’re more interested in spoken word; 68% said they want to improve or better themselves; and 61% are looking for motivation or encouragement.

Having more time to listen was a factor for 74% of survey respondents, while the pandemic was cited by 63% as giving them an opportunity to change their listening habits. 68% felt responsibility to listen more to stay informed, while 65% said it provides perspectives they can’t find in other media, 58% said on demand, spoken word audio feels newer and fresher than live radio.

Those struggling with anxiety and depression are also turning to spoken word audio. 67% said they listen because they want a break from negativity, 64% said they want to escape from news and current events, while 54% said it helps them navigate life problems and hardships. Another 52% said listening to spoken word audio makes them feel less lonely. Mental health motivations were cited more among men and those aged 18-34. Notably “a break from negativity” was the third highest motivator overall for Hispanic and Latino listeners, while escaping news and current events ranked third with African-American listeners.

69% of listeners said it’s easier to find content that is made for people like themselves, 60% said they found hosts who are like themselves and with whom they identify, and 41% said spoken word helps them stay connected to their religion or spirituality. Diverse listeners and those 18-34 indexed high in this response area.

40% of monthly spoken word audio listeners said they’re listening more due to COVID-19. That rises to 59% among those aged 18-34, and 61% among Hispanic listeners. 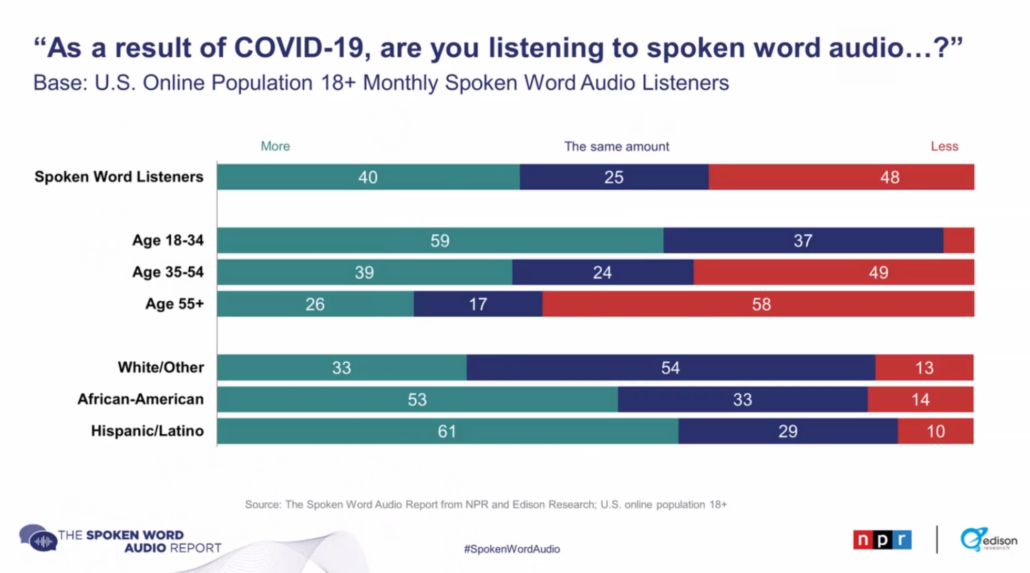